October was a major month for growth on the Braintrust network: Braintrust hit new records for network revenue, number of people hired, number of jobs posted, number of press mentions, and more. Plus, major updates with governance!

A lot happened on Braintrust in October. Here are all the biggest growth updates you should be aware of:

Sales volume hit a new monthly record in October …. at $3.3M! That’s more than 16x the monthly revenue of the highest grossing project on the Web3 Index, which was $200,000 at the time of this writing. 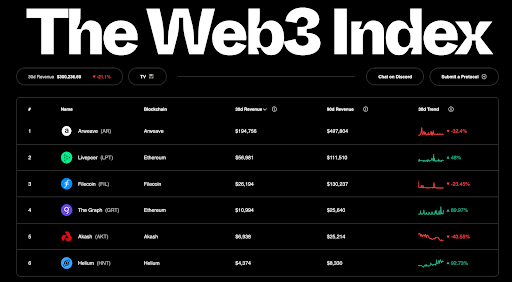 Results like these prove that Web3 isn’t just a cool idea for networks - it’s one with merit and the potential for real, positive impacts!

And if that increase isn’t enough to get you feeling optimistic, maybe this will: there have officially been over 1,600 jobs posted on Braintrust! 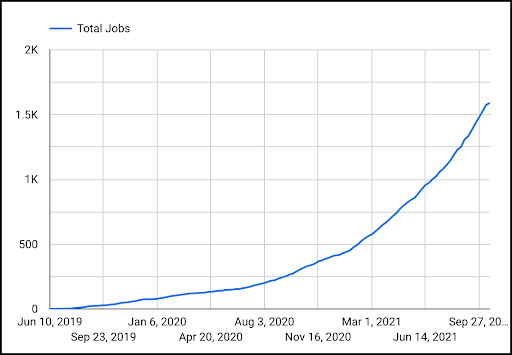 Since Braintrust launched out of stealth in June 2020, over 1,600 jobs have been posted on the network. That’s a lot of teams looking to find the talent they need to achieve their goals.

And who are these jobs with? Only the best brands in the world.

This represents more than just the success of the network. Fortune 1000 brands from all over the world are choosing to hire freelancers over full-time employees. They’re leaning into a distributed, dynamic work model. And for many, this is their first foray into the world of crypto.

Braintrust is providing a new way to hire, and these companies are getting great results.

And what's more, hires grew by 50% from September to October. 🚀

Now that’s news to cheer about. More and more freelancers are landing incredible jobs on Braintrust. The more that rate increases, the greater impact this network is having on people’s lives every day.

The results of the CoinList sale are out… and they’re good!

Braintrust’s mission is to spread economic opportunity around the world. And thanks to this sale, the network now boasts token holders from more than 122 different countries, with top international representation in Japan, Hong Kong, Turkey, Russia, Vietnam and Singapore.

Not only is governance alive and well on Braintrust (putting that user-owned, user-controlled promise to work!), but ten different proposals have already passed voting! And a major one was token staking.

Token staking is one function of BTRST that allows users to demonstrate their commitment. There are three ways this can be used:

Not only did the vote to implement token staking pass, but the community also came to a consensus to implement job token staking first. With that agreement finalized, the work of building and implementing staking capabilities can begin. To read more about staking, read the Braintrust whitepaper.

The world is buzzing about Braintrust! In October, eight different media outlets and podcasts published articles and episodes about this user-owned talent network. They covered things from talent stories to the Web3 model to the benefits of blockchain to the uses of BTRST and more!

What Braintrust is doing isn’t just different, it’s better than any option out there. And the world is noticing.

Check out the press page to see them all.

The real heroes of Braintrust are the talent who comprise the network. And now, more and more freelancers are getting the chance to tell their stories and share their experiences on Braintrust.

In addition to sharing what they love about Braintrust, several shared how much success they’ve had working with this zero fee model. Like Zoe Rem, who earned $75k in 8 months with Pacific Life, And Lorenzo Parks, who is earning 55% more by working on Braintrust than he did through staffing firms.

A lot of product improvements happened in October, but one of the biggest was a total revamp of the Talent Homepage. Thanks to this change, everything a freelancer needs to be successful on Braintrust is easy to find right when they log in. It includes the most recent amazing job opportunities, updates on who is hiring, and helpful resources. Plus, events that help you improve your profile, proposals, interview skills, and much more!

Braintrust is a user-owned talent network. And now, the experience is even better for those users.

There’s a lot happening on Braintrust, and there are tons of ways you can get involved and help build this growing network: