From Bikes, to Barback, to Braintrust: The Zoe Rem Story.

Zoe Rem originally moved out to the west coast to race motorcycles. Her nine-to-fives have historically been a little less dangerous, but that’s not to say she ever stopped taking risks in her career. From social media manager, to craft cocktail bartender, to freelance UX designer, Zoe’s journey has been full of leaps of faith.

After graduating from St. Mary’s College in 2008, Zoe got a job doing social media management. Like many of us, she hated going into the office everyday. Unlike most of us however, she actually did something about it. 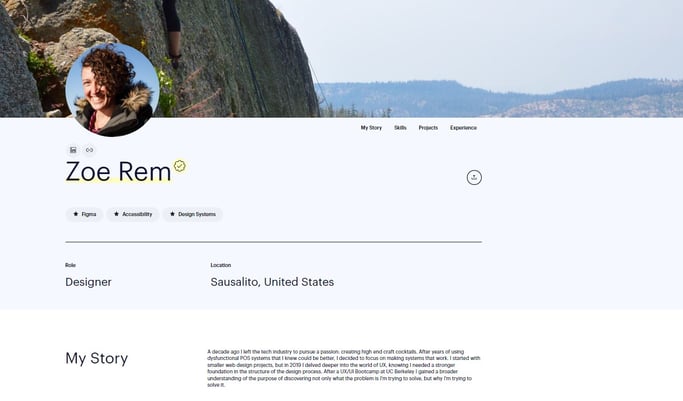 Zoe quit her job and got a bartending gig at a San Francisco restaurant. She was sure that working in tech wasn’t right for her, but as fate would have it, she ended up discovering her passion for UX while bartending (the restaurant had really old Point of Sale [PoS] systems). It may have started as a flexible job that would give her time to race, but it became much more.

Zoe participated in the early testing of UpServe (a pioneer PoS technology), engaging in user testing with their UX team. She loved it, started doing web design for smaller companies on her own time, and eventually got big enough to transition out of bartending and into full-time UX work.

Her bartending position was a direct introduction to UX, but it also gave her soft skills she needed to pursue this path. Zoe cites her cocktail craft as her first means of creative expression: mastering cocktail making gave her confidence in her creativity, which would become one of the most important elements of her career in UX.

According to Zoe, drink-making and digital design are parallel processes in that the most complex drinks or designs are based on a set of basic underlying rules. Having a strong grasp on those rules lets you play with them. The stronger your foundation, the more creative you can get.

When asked what she thinks makes her particularly successful in her freelancing work with Braintrust, Zoe gave an answer you may have heard before: communication.

Communication skills are important in all jobs, but contract work in particular requires you to be direct and effective. It makes sense —you’re only with a client for a short amount of time and you’re trying to accomplish a specific task, so you better be in alignment about what that is.

That skill set, combined with a creative flair and commitment to perfection has enabled Zoe to earn $75,000 in just 8 months of work--netting close to $10,000 each month through her work on Braintrust, all while keeping 100% of what she earns.

Braintrust gave Zoe the confidence and security she needed to freelance full-time. There’s never a worry about where her next project will come from, so she doesn't waste work time looking for her next gig. Instead, she can focus on what she does best (actually working on UX) without having to deal with the office culture she dreads or the uncertainty of freelancing on her own.

Braintrust has let Zoe live the life she wants. She doesn’t have to report to anybody but herself, but she’s still part of a community. Because Braintrust is user-owned, it creates stability and accountability that is much harder to find in the larger freelance world. When Zoe succeeds, Braintrust succeeds, and vice versa.

Oh, and she also happens to make twice the amount of money she ever has. Honestly, who wouldn't want that?

What are you waiting for? Apply to join Braintrust now! If you’re not quite ready to dive in full-force, join the community on Discord.

How to Create the Best Video Setup for Your Interview.