In November, the Braintrust network saw incredible growth in clients, jobs, talent, community, GSV, and more. And that’s all thanks to this unique Web3 model that puts users first!

🎉 Before you jump into the November Growth Report, did you see the great news? Braintrust announced the private purchase of $100M of BTRST by Coatue, Tiger Global Fund, and other early backers to fuel community-led innovation! Get the scoop here.

Braintrust co-founders Adam Jackson and Gabe Luna-Ostaseski shared their thoughts as we closed out a successful Q3. Hear their personal highlights, what they’re excited about on Braintrust, and a few challenges the network faced last quarter in the most recent founder update:

If you prefer reading, you can catch these updates in their founder letter.

Braintrust’s Gross Service Value (GSV) is a special statistic: It shows how much you, the Talent, have made on the network. In 18 months, that tally adds up to a pretty spectacular $28.2M (compare that to the sales volume of the highest grossing projects on the Web3 Index… it’s exponentially higher).

Clients were busy in November! The network surpassed 1,800 jobs posted to the platform. Teams all over the world are heading to Braintrust for their hiring needs, with jobs ranging from blockchain engineering to UX/UI design to copywriting and more.

The hiring market may be tough out there, but it’s smooth sailing on Braintrust. Just check out a few of the brands who hired on Braintrust in November: 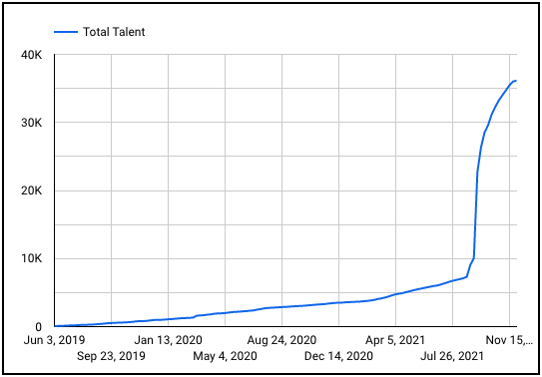 Braintrust saw a major influx of Talent sign ups in November. Almost 3,000 new Talent applied to join! This user-owned talent network is growing at remarkable rates, and it’s just further confirmation that Talent are tired of the extractive tactics of traditional hiring.

User-owned and controlled. Decentralized. Community-led. Built in public. Open Sourced. These are all core traits of the Braintrust network. And thanks to some major work done on the platform in November, many more community members will soon be able to build the network's open source technical infrastructure through a grant bidding process.

To get there, Braintrust has been working to:


The first community-led product project focuses on building an open-source ticketing system, and it is almost ready to launch!

Braintrust, a Web3 talent marketplace that incentivizes participants with tokens ... is gaining ground on public competitors such as Upwork." 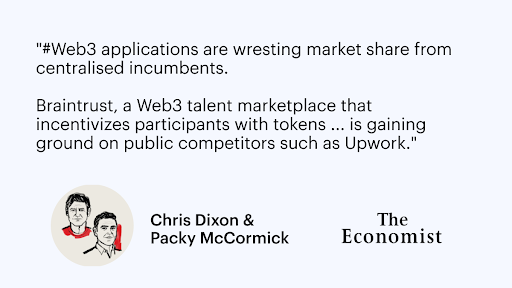 There is more to crypto than just financial applications. As a member of the Braintrust network, you know that. So do Web3 thought leaders Chris Dixon and Packy McCormick, who recently wrote about the future of Web3 in The Economist, and gave a shoutout to Braintrust!

Other places you might’ve noticed Braintrust in November:

Talent are the heart and soul of Braintrust. And in November, they shared their stories about how Braintrust has changed their lives!

Vivek, who is making 5x his previous rate on Braintrust and finally gets to live in his hometown and spend quality time with family thanks to finding work on Braintrust.

Lida, who takes pride in owning her work relationships and accessing interesting, high-quality jobs with great brands while freelancing on Braintrust.

Anthony, who not only loves his work, but also loves who he gets to work with while contracting with Fortune 1000 companies like Porsche on Braintrust.

The community has had some major triumphs in November: 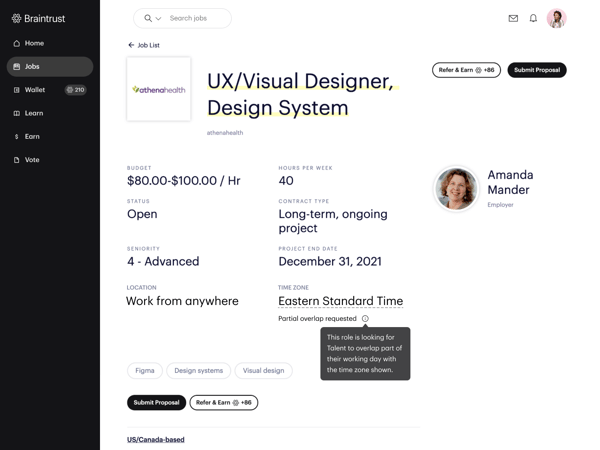 In November, Product shipped an incredibly important feature: Working hours. This means clients can specify which hours of the day candidates would need to be available for a certain job. This will make it easier for Talent to see where there is overlap in their preferred work hours, and will open up even more opportunities to hire and get hired.

There’s a lot happening on Braintrust, and there are tons of ways you can get involved and help build this growing network:

Adam Jackson Was a Guest on Around the Coin Podcast!