Braintrust is leveraging a crypto token to create a decentralized Web 3.0 network that distributes control equitably to its members, rejecting outdated business models that rely on extracting disproportionate value from their users.

Currency has always been about control.

That’s been true since ancient times, when rulers realized that, by owning the mining, smelting and minting of coins, they could easily control the production, supply and circulation of currency.

The first corporations, named after the Latin word corpus (meaning “body of people”), allowed businesses the right to make contracts and sue for their enforcement — a right that could only be granted through official decree, whether it be from a Roman emperor or a monarch like Queen Elizabeth, who awarded the East India Company of London its exclusive trade monopoly in the 17th century.

Through corporations, investors were able to share ownership, pooling their resources together in order to split profits and limit risks — leading to the formation of limited-liability corporations, or LLCs, beginning in the ’70s, which allowed investors to protect their personal wealth and have become widely adopted since.

In the modern system of governance, most companies are managed by a board of directors and beholden to investors. The problem? This arrangement inevitably leads to companies prioritizing investor interests over those of their workers or users. When times are good, shareholders reap the benefits. When times are bad, workers are the ones that take the hit. We’ve come to accept it: the workers are the ones who always get screwed. It’s just the way it’s always worked.

Consider the traditional method of building up online marketplaces. Talent networks, such as Fiverr, spend millions to build market liquidity with both client companies offering jobs and the talent fulfilling them. But once they reach scale, network operators are incentivized to make decisions that benefit their investors, who want to recoup their investment — often placing the burden on talent by taking as much as 20% to 40% of their earnings in the form of fees. 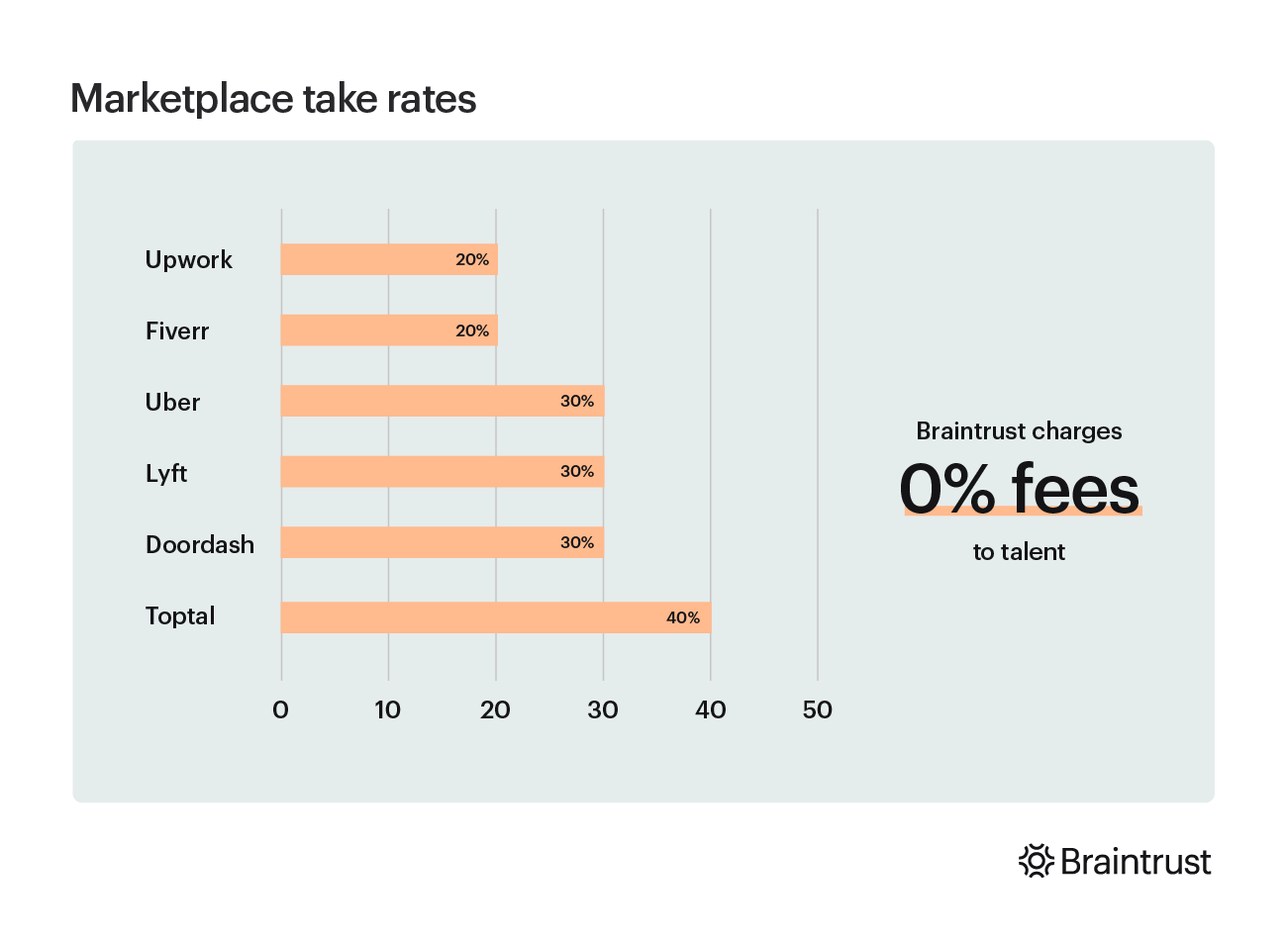 Those misaligned incentives almost always lead to marketplace collapse. But what if there was a better way, one that hands control over to those who truly produce value instead?

How crypto helps distributed ownership get it right.

If the Web 1.0 built the readable internet, Web 2.0 is the interactive internet we know today — an internet that has enabled information abundance and wealth creation but has also centralized profits in the hands of a few fee-extracting middle men, namely the Big Five tech companies: Amazon, Facebook, Google, Apple and Twitter.

The emergence of Web 3.0 technologies, and, particularly, the blockchain ledger enabled by crypto, paves the way for a new possibility — one in which the benefits of ownership and governance are equitably distributed.

Such systems use crypto to systematically decentralize ownership while creating a positive incentive structure that rewards users who build a business with more say over how it operates. They are...

With Web 3.0 businesses, there is no centralized control and no monopoly pressure distorting the marketplace, benefiting both buyers and sellers. Community ownership and governance broadly distributes value, while crypto-enabled transparency creates a marketplace that quickly reflects true market value, allowing for accurate price discovery and efficient capital.

It’s a model of aligned incentives that returns value to those who actually produce it.

How it works on Braintrust.

Braintrust, the world’s first decentralized talent marketplace, is a prime example of how crypto can be used to create shared ownership and governance.

The Braintrust network is built on the Ethereum blockchain, providing a permanent, permissionless record, meaning it can be accessed by anyone with an internet connection and cannot be altered over time. The people making their living on Braintrust are programmatically rewarded with BTRST tokens for helping build the network.

These BTRST tokens can be used to access special perks, such as free and discounted software or career resources. However, its central value is governance and ownership. BTRST token holders can propose changes to improve the network, and vote on change proposals, with each token representing one vote — meaning those who do the most to build the network rightly have the most say in its future. 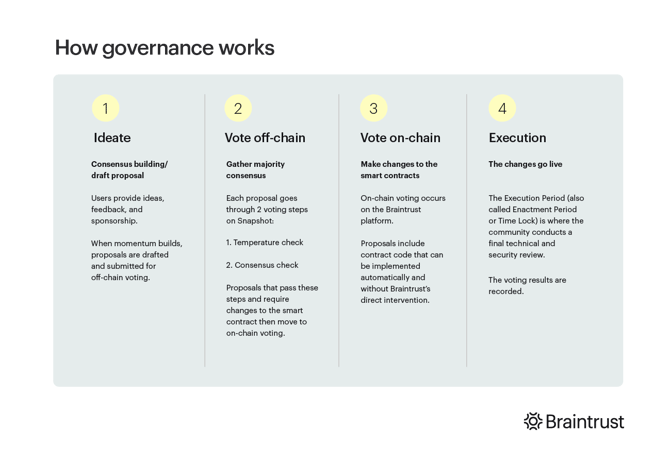 The process may begin with a Braintrust user discussing a potential change on the community Discord server. They could then submit a proposal, which is subject to an off-chain vote on Snapshot — a governance tool that includes two steps: a simple yes/no vote that determines whether the community is interested in the proposal, and then a consensus check that lets the community refine the proposal and determine variable voting choices.

Once ready, the proposal moves to an on-chain vote, which occurs on the Braintrust governance site and is used to determine outcomes that require a change in the blockchain’s smart contract code, such as a change in fees or token rewards. The final phase of governance is the Execution Period, where the community does a technical review of approved proposals and ensures implementation.

You can read more about the Braintrust governance process here.

Historically, business models were incentivized to solely return value to a handful of central investors. But with decentralized Web 3.0 businesses like Braintrust, value is distributed through a system of aligned incentives, where users are motivated to build up the network they make their living on — and because users are the ones governing it, the network has no incentive to ramp up exorbitant fees on them.

You can start owning the way you work and are rewarded for it by...

Have thoughts about the future of work and the BTRST token? We would love to hear them: Tweet us @usebraintrust.

Growth Report #36: Building Up the Network in the Downturn.