High fees are wrong, benefiting a select few middlemen while potentially costing you, the talent, millions. Braintrust believes you deserve to keep your hard-earned money, not give it away to a centralized corporation for the pleasure of making an introduction.

Web 2.0 job networks, like Upwork or Doordash, are all built through the same old model of raising and spending capital to build up a marketplace of buyers and sellers.

Likewise, they all suffer from a shared flaw: that once they’ve built their network, they end up charging talent high fees — as much as 20% to 40% of their workers’ revenue — to pay their investors back.

As Bill Gurley once wrote, that simply is “a rake too far,” with high fees creating misaligned incentives … inevitably leading to disintermediation, as high-quality talent abandon networks that no longer serve their needs.

Once jobs become large enough, the fees make it nearly impossible to keep those jobs on the platform. And once jobs go off platform, so too goes the benefits of an online network — things like transparent ratings and reviews, insurance and escrow — with both buyers and sellers left to fend for themselves.

High fees are necessary for Web 2.0 networks to survive once they are built to scale, but they also spell certain collapse for the network over time.

That’s the essential conundrum of the old model — and it’s that flaw which creates an opportunity for something new and disruptive to come along.

As Jeff Bezos is fond of saying: “Your margin is my opportunity.”

Let's look at the past to predict the future.

Think about all the ways high fees have been replaced in recent years.

Vanguard pioneered the low-fee, total market index fund strategy that is now used by more than half of Americans for their retirement funds. Not only did the total market fund save more for its customers, but it has regularly outperformed broker-managed funds consistently over time.

There are countless more examples. High-frequency traders have switched from expensive stock brokers to low-fee services like eTrade. Software sold on the cloud has replaced software sold on premise, greatly reducing costs for the client.

All these low-fee models have something in common: They eat the middlemen, creating a network that actually serves both the needs of buyers and sellers better.

The same should be true for talent networks.

High fees unnecessarily ramp up costs, creating a bloated marketplace that doesn’t serve you, the talent, or the companies you work with.

That cost is significant. Knowledge workers can lose millions to the middlemen in their careers.

In fact, let’s do the math.

A fortune lost to unfair fees. 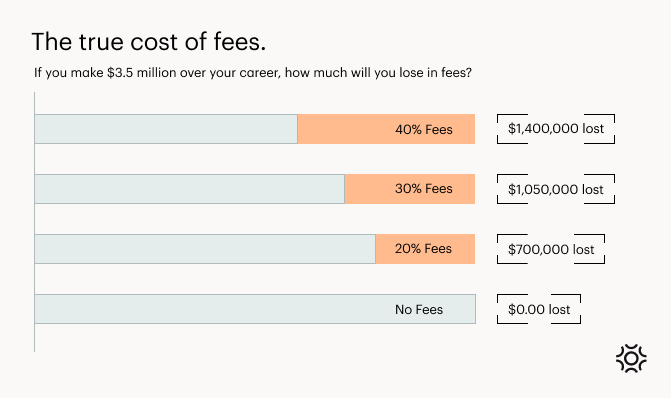 That’s right: You can easily lose a fortune in fees to the middleman.

For talent, that money isn’t just a number on a P&L statement.

That $700K could be what helps you buy your first home or lets you put three kids through college without debt. In some parts of the world, it could feed and house an entire family, a gift lifting generations.

And that calculus isn’t just bad for talent. It’s bad for the companies offering jobs too, who throw away millions thinking they’ll get access to the talent they need but instead get stiffed by fees and lost in a sea of unmotivated, unvetted workers.

Which is why fees matter. A lot.

Braintrust is using Web 3.0 technology to eat the middleman, cutting out fees while building the world’s first decentralized, liquid market for global talent.

By having automated software run most day-to-day operations, Braintrust eliminates the need for a costly centralized team and an even more costly acquisition strategy, passing those savings on to you — by charging talent zero fees.

What’s more, by routing its governance system through the BTRST token on the Ethereum blockchain, the Braintrust network is able to programmatically reward users — both talent and enterprises — with shared control over the network.

This low-fee model opens the door for a whole new class of enterprise and talent signups who would never have touched a marketplace that could cost them six-to-seven figures in fees.

Web 3.0 talent networks are able to attract highly skilled and in-demand talent, who would never join high-fee marketplaces that attract lower paying or quality work. On Braintrust, the average job size is $84,000.

They are also able to host large, ongoing enterprise projects that remain on platform, with buyers and sellers seeing the aforementioned benefits (such as public ratings and reviews and price transparency).

That’s why hundreds of clients, including Fortune 1000 companies from Porsche to Twitter, are offering jobs on Braintrust.

This is what it means to have aligned incentives.

So the millions of dollars you would have lost in fees on extractive Web 2.0 networks? Keep it.

You deserve to own the true value of your work.

Instead of your money going to networks that you don’t have any stake or control in, what could you do with an extra six or seven figures?

Let us know by tweeting us @usebraintrust.

You can also get involved by:

How to Create the Best Video Setup for Your Interview.