Work from home policies aren't the only things making waves in the corporate sphere. Get the expert analysis of work trends from HBS Professor Chris Stanton. 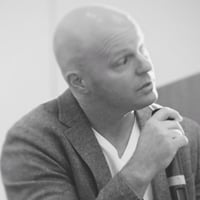 And particularly during COVID, a software layer over neighborhood restaurants changed how you eat at night.

But you could argue that as much as the on-demand revolution changed how we satisfy some of our most basic needs, it still hasn’t fundamentally changed the world of work. Over 80% of the employed workforce still has a full-time job with a company. And the vast majority of knowledge workers rock a standard 9-to-5 corporate job with a salary, benefits, a boss, and the occasional memo about new cover sheets on TPS reports.

(Did you get the memo, by the way? We’ll go ahead and make sure you get another one.) 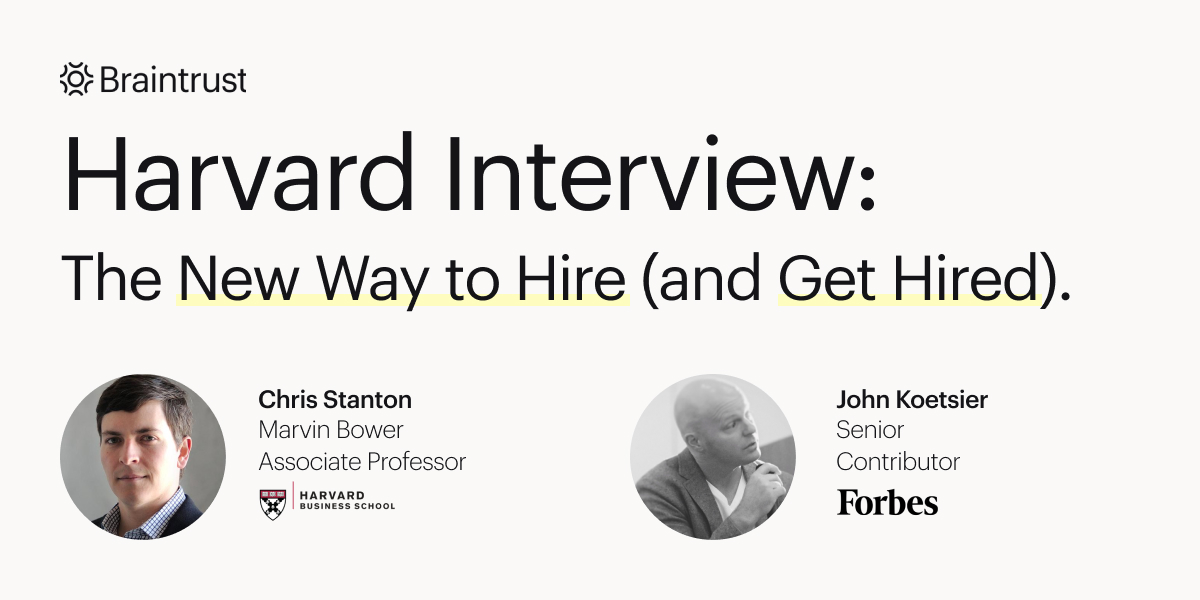 Harvard Business School professor Chris Stanton has been studying labor markets for over a decade. While there’s been massive change for the low-end gig economy that atomizes tasks and reorganizes profit centers for transportation, delivery, or other simple jobs, there hasn’t been a lot of innovation for knowledge workers. Much less, in fact, than Stanton assumed would happen.

And in a recent interview with Braintrust, Stanton shared six massive shifts that are changing the nature of work, what jobs look like, and even the very shape and size of corporations.

COVID’s been a key driver of change in 2020 and 2021. For work that means many more people are now comfortable with remote, Stanton says. It turns out that being remote doesn’t just change existing jobs in an enterprise.

It also changes how we think of coworkers. And who we think can become a colleague. Including temporary coworkers. Contractors. Freelancers.

“If you don't have to bring someone into your office, it opens up the set of people you're willing to consider for a job,” Stanton says. “I think that this forced experimentation meant that some firms or some leaders who didn't think that this would have been possible have now realized that they can pull off different models relative to what they had experience with.”

In other words, work isn’t just something that happens in rigidly structured places via rigidly structured organizations. And if my boss is in Miami, my colleagues are in L.A., and I’m in Nevada … does it really matter if we bring on a new team member who happens to live in Utah?

Trend 2: Finally, the emergence of the digital-first enterprise.

OK, most startups have been there for a while.

But not many enterprise-scale corporations.

Believe it or not, “digital transformation” for the enterprise is literally in its second decade of being a thing. And while it’s been a wonderful trend to preach about at conferences and pontificate about in books, somehow “the way we do things here” plus questions about exactly who is moving precisely whose cheese have conspired to minimize actual, substantive, radical change.

And to block innovators in many enterprises from doing what they’ve wanted to: make every possible process digital first.

When you’re forced to change, when you physically can’t operate the way you used to, change happens fast. And … you might even get some help to make it happen.

“COVID forced digital processes to be adopted quite quickly,” Stanton says. “And many of the organizations that had to do this probably didn't have the spare talent internally that would enable digital transformation.”

COVID made the need -- and the benefit -- obvious. And, as a few companies like State Farm that successfully digitally transformed learned years ago, enterprises need a mix of external talent and internal resources to drive the change they need. Stanton estimates that most processes that would have taken easily four years to digitally transform ended up changing almost overnight.

Crypto isn’t just a store of value. Nor is it just a plaything of the Technoking of Tesla.

Crypto is actually a powerful way of aligning incentives between Talent and employers, much to the surprise of researchers, academics, and likely business executives themselves.

Even worse, freelancers don’t win when the platform grows: growth of the platform inevitably means more competition for scarce jobs.

Crypto, in Braintrust’s case, BTRST, can help realign those incentives.

“The token allows [Braintrust] to be much more agile in providing incentives for both sides of the market to grow the market,” says Stanton. “But more importantly, it allows them to be agile in terms of experimentation with those incentives.”

It starts with Talent taking home every penny of a contract with the enterprises they work with. But Talent also earn crypto by referring friends and other new Talent, by vetting them, and by helping to grow the size of the network.

And employers win by paying a flat fee, to the platform, equal to 10% of what they’re paying Talent. That’s 30-70% less than legacy platforms, stretching their dollars farther.

“I think that there has been far too little experimentation among many of the incumbent platforms because they're worried about disrupting either supplier demand or some focal point about how they think the market works,” Stanton says. “As a result, you end up with solutions that are probably okay on average, but don't work for any of the sort of idiosyncratic big ticket use cases that you might think are important drivers of value.”

Plus BTRST is used for governance to make decisions about how the network and product grows.

“But it also means that there's nothing that's exactly set in stone and the market can evolve based on what the participants in the market would sort of vote on in terms of how this would work,” Stanton adds. “In the early days they can just run different A/B tests to figure out what actually works well and what doesn't work well, both from an incentives and an operational standpoint ... that is pretty exciting to me.”

Trend 4: The hybrid future of work.

Old model: 9 to 5, Monday to Friday, in the office, downtown.

“My rough guess is that most workers will go back into some hybrid type of arrangement where there will be a couple core days a month when those folks are expected in the office to interact face to face with others on their team or others throughout the company, or that might be one day a week,” Stanton says. “I think that there's still likely to be some face-to-face component for people who are going to be in enduring full-time roles.”

Prior to the pandemic, less than 10% of the workforce was remote. During COVID, it’s been multiples of that: a major shift relative to what we had before.

Some companies may stick with fully remote. Wordpress, which runs a third of the internet (and whose founding developer spoke on the Braintrust podcast) has done that for years. Quora opted to go fully remote during COVID, and some companies will follow that lead. Others will fully return to in-person work.

But the majority might swing back to the middle of the spectrum.

“I think the sweet spot is probably hybrid because it allows people to have some of the flexibility that they've learned to enjoy with remote, but it also will enable some of the tasks -- that in-person learning about teammates -- that is a little bit harder to do virtually,” Stanton says. “If you think about what that means for the ability to plug in contractors or the ability to plug in outside talent, those folks will probably find it much easier to plug into teams that are used to operating where the usual MO is somewhat remote.”

In other words, companies are likely to go hybrid because their employees like it that way. And they’re likely to be more flexible in integrating outside and on demand Talent because that model works well in accessing top freelancers.

Trend 5: The shrinking core of corporations.

The corporation is a 400-year-old innovation for melding Talent and capital over time to create product and profit. Corporations range from trillion-dollar giants like Apple to 2.3 million-employee mammoths like Walmart.

The traditional corporation is shrinking, thanks to two factors.

“There are two forces that are coming from opposite ends of the spectrum that will change traditional employment relationships,” says Stanton. “I think most of the commoditized work that is relatively routine we've already seen being automated and the work that we haven't seen automated, we've seen outsourced.”

And as that happens, the conventional “job” blurs.

Traditionally, corporations have kept “secret sauce” and purpose-built solutions in-house: things that you didn’t trust the market to provide. In business as unusual -- like during a global pandemic -- corporations are starting to be more comfortable with contracting, even for some core functions like innovation. That means the in-house component gets smaller, Stanton says.

“My guess is that we will still see some enduring types of jobs, in most companies, but that the line is going to get blurred a bit,” he says. “My mental model is basically that the innovative stuff or the stuff that you don't know how to do in-house is going to certainly go out to contractors or the outside market.”

Commoditized functions can be traditionally outsourced to partners who can do them more efficiently, and the core of a corporation, the people in long-term job-and-benefits relationships will shrink.

In the early 2000s if you wanted to do innovative cutting-edge internet and web technology, you came to San Francisco or San Jose. The Encyclopedia Britannica has been published continuously since 1768, but in the early 2000s I visited their innovation center where they were taking a 253-year-old product into cyberspace. It was upstairs in a fairly nondescript office in SoMa, and there was a ping-pong table.

Innovation had a center.

And though the center grew and New York and Austin and Seattle and dozens of other cities locally and internationally developed innovation centers of their own, there were very definite places where you met the very definite people who were funding and building the future.

“Dropbox just sold their office space in San Francisco and you've seen Quora and other tech companies that said, you know, we used to be in these very expensive spaces in Mountain View or other parts of Silicon Valley, and we no longer need that,” Stanton says. “I think we're seeing sort of a reallocation of economic activity to places that you may not have forecast at this time last year.”

“I have a friend who's in Salt Lake City and has been trying to buy a house for the last four or five months, and prices there are skyrocketing,” Stanton says. “And the same is true in Boise, Idaho.”

Innovation is now everywhere, and Talent can live wherever they want.

A better way: Enterprise and Talent

Interested in exploring a better way to hire and innovate? NASA and Nestlé are already using Braintrust to build their futures. Hiring the old way doesn’t work anymore.