Misaligned incentives are the reason why Web 2.0 networks so often work against the needs of their own users. The user-owned, decentralized talent network creates a way to align those incentives and give you back control over the value you create.

Why do you work?

Everybody who works is trading precious time and energy for something they believe is valuable — perhaps wanting to challenge themselves, to provide for their family, or make the world a better place.

As long as that value exchange remains worth it to both employees and employers, incentives are aligned: everybody is happy.

But all too often in traditional work arrangements, incentives aren’t aligned.

When that happens, you see workers reject the status quo. That misalignment has driven “The Great Resignation,” where millions of workers left jobs that no longer served their needs to form their own freelance careers.

Still, even those who leave behind full-time jobs often find the incentives remain stacked against them in the freelance world.

That’s why a similar exodus is taking place out of out-dated Web 2.0 talent networks, from Uber to Upwork, as Talent recognize that the old way is incentivized to work against their needs rather than for them.

The old way: When incentives aren’t aligned, by design.

Talent have historically faced a set of sub-optimal choices when choosing to leave behind full-time work arrangements.

Highly-skilled knowledge workers can work for an agency — large consulting firms, such as Deloitte or PwC, which essentially warehouse Talent to contract out to enterprises. The benefits for Talent aren’t insignificant: They get access to ongoing work with top clients, while the agency deals with procurement issues, such as billing and escrow.

Ultimately though, agencies are driven by incentives that directly undermine both the Talent they represent and the enterprises they contract for. That’s because agencies make their money on the spread between what the Talent makes and what the agency charges.

Those incentives hurt both sides of the transaction in the end.

Talent see their wages artificially suppressed — not just in the broader marketplace, but even within the agencies themselves: Consider this recent report showing that PwC staff who were born in lower socio-economic backgrounds were paid 12% less on average than their own colleagues.

Clients, meanwhile, pay a marked-up premium — sometimes 2x, 3x, even 4x true market value — that far outstrips the value of the services they contract. This can lead to egregious failures, such as when the CDC paid Deloitte $44 million to build software meant to manage the COVID-19 vaccine rollout across America, only to see most states quickly abandon it due to its many glitches.

Some Talent forego agencies, instead finding jobs on the talent networks that are now all around you: everything from Handy and GrubHub to Fiverr and Upwork.

Consider Uber, which was initially able to pay higher wages to drivers and cheaper rides for riders by using investor money to float the costs of building upon its marketplace.

That model worked, for a time. But eventually, its investors, rightly, wanted to see a return on their investment. To do so, Uber had to either raise prices on riders or depress wages for drivers — leaning most heavily on the latter, since attracting more riders was key to it building market cap and stock value.

Which is how, as Uber executives got rich off their splashy IPO in 2019, many Uber drivers were struggling to pay their rent or mortgage as some made less than $5 hour.

What happened? Uber faced the same problem that all Web 2.0 networks eventually face: That, with time, their incentives eventually diverge from those of their users — a trend aptly shown by this graphic from Chris Dixon, a partner at Andreeson Horowitz: 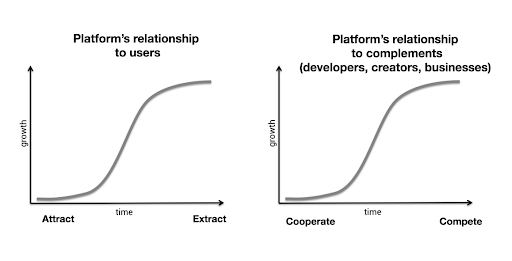 What Talent really want, and what Web 2.0 networks can’t give them.

These problems may seem like bugs in the system. But in many cases, they are the system.

As author and speechwriter Dan Pink says in his 2009 Ted Talk, “The Puzzle of Motivation,” there is a “fundamental mismatch” between the incentives that businesses provide their workforce and the things that actually motivate them.

Businesses typically offer “extrinsic motivators,” such as financial compensation, but that is only one small slice of what workers want, according to Pink.

Yet despite Talent valuing these three critical motivators most, companies are often structured in a way that makes them nearly impossible to achieve.

When a company’s primary goal is profits, the bottom line will always be king — more than a greater purpose, more than the resources to allow employees mastery, more than the desire by employees to have autonomy over how they work.

That’s why the Ubers of the world are fated for failure.

Because Uber operates in both driver and rider marketplaces, it cannot pay drivers more to incentivize them to continue to operate for Uber — and only for Uber — without driving up the cost for riders, who would then abandon the app for competitors.

Uber can offer some autonomy for drivers to work when, where and how long they would like, but they have no way to offer mastery or purpose. And because Uber drivers lack ownership, they’re not incentivized to remain loyal to Uber or work in its long term interests.

And they aren’t the only ones. Every ride sharing company around the world is struggling with this challenge, as this Knowledge at Wharton article points out. And you see the same challenges plaguing other talent networks, from DoorDash to Fiverr to Upwork.

Just using the old playbook, it would seem like all marketplaces are stuck in the misaligned incentive conundrum.

Thankfully, there is another way.

A new model with aligned incentives.

The emergence of Web 3.0 technologies, built on blockchain, makes it possible for a different path: decentralization.

That’s the path Braintrust is paving with the first user-owned, decentralized talent network.

By using the BTRST token, built on the Ethereum blockchain, it can programmatically award governance over the network to its users — both the Talent and the clients who make their living on it every day.

The network operator, typically run by an expensive and inefficient centralized team, is replaced by relatively autonomous software — creating savings passed on to marketplace users in the form of low or no fees.

Talent earn their full rate with no rake, while also owning their work history and reputation. Going back to Pink’s three key incentives, Talent are able to receive autonomy, mastery, and purpose while having a say over how the network they create value on is operated.

Clients are only charged 10% of the agreed-upon contract, which is directed back into improving the network. They receive complete price discovery thanks to the blockchain’s fully permissionless and transparent systems, giving them confidence they are paying true market value for services.

The network works in the interests of its users, since they are the ones who are in charge of it. And because they own part of the value they create on the network, those users are incentivized to build and grow the network.

That’s what it means to have truly aligned incentives — and that’s why so many are joining the Braintrust movement, which has grown to include thousands of Talent and hundreds of Fortune 1000 companies, from Nestle and Allstate to IBM.

How you can get involved.

Braintrust is building a network of aligned incentives that create value for everyone on the marketplace, from the clients who receive significant savings to the talent who keep their full contracted rate while being charged no fees.

It’s a beautiful thing. And if you haven’t already, you should see it for yourself.

Adam Jackson Was a Guest on Around the Coin Podcast!

Growth Report #25: The Incentives Are Aligned on Braintrust.